I have a temporary job at the moment doing some admin for the NHS.  The people there are lovely and we soon got talking, and soon enough I mentioned my three Maine Coons. ‘Oh you must speak to Bev,’ they said,  ‘she’s got two amazing cats, can’t remember what breed, but they are spotty like leopards’.  Wow, I thought, they must be Bengals.

Sure enough, when Bev appeared we started talking cat.  She was soon showing me pictures of her two stunning Bengals. Then I said ‘I raw feed my cats’ and she said ‘I do too!’

Bev said she had never met anyone else who raw feeds their cats. We explained to the others the basics of raw feeding and why we do it. Everyone was fascinated. It was a great opportunity to spread the word.

I get most of my cats’ food from a great supplier in Sheffield called Better4Pets. Bev lives out of town and buys selections of meat in the appropriate ratios from local suppliers, and chops it all up herself. Her cats are quite fussy and sometimes refuse what they happily ate a week ago. Typical eh? The upshot of this is that she has a freezer full of Natural Instinct Wild Game Bird which her cats won’t eat. Well, I said, I might  be able to take it off your hands.

Next day, Bev brought me a tub of said Wild Game Bird, and I brought her a pig’s heart in return. Our co-workers were terribly amused by this. 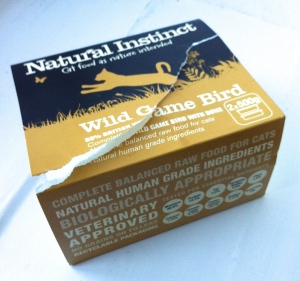 I have never tried Natural Instinct, although I have heard of it.  This is only because there is no stockist near me, and it’s quite expensive to purchase via mail order. So I was very interested in trying it out on my cats.

It really is top of the range stuff. Just look at the packaging.

Great info on the wrapper

The food is very finely minced, so the texture is quite soft and mushy. So you would need to look after your cat’s teeth in some way if you fed this regularly. However, they have taken all the worry out of raw feeding because they have balanced the food and guarantee the correct ratios. The price to be paid for this is – it’s really expensive. The tub shown is 500g, and it costs £2.25 (you buy it in a pack of 2 for £4.50).  I buy a similar mince from Better4Pets called ‘Mixed Game’. It is not guaranteed balanced, but it does contain some bone and offal. It’s £0.95 for 454g (1 lb) – roughly half the price. The supplier to Better4pets is Manifold Valley Meats, who are based in Leek, Staffordshire.

Well, two out of my three cats loved the Natural Instinct. That was good enough for me to go ahead. Bev asked me to buy some food from Better4Pets to try on her cats. I brought her some Rabbit and Turkey, Mixed Game, and Venison Trimmings. We held our breath to see if her little darlings would go for it. It would save her a fortune if they did. But no! Fussy little noses were turned up, gah!

Still, I took the freezerful of Natural Instinct off her hands. She only charged me £1 a tub. Herbie still won’t touch it but the other two are polishing it off. And I have a nice stack of re-usable tubs in the cupboard.