Gratuitous post about Uncle Herbert.  It has taken us a while to fully appreciate his many qualities!  We were lucky enough to meet his mother, Lily, and he is just like her.  Sweetest boy ever. 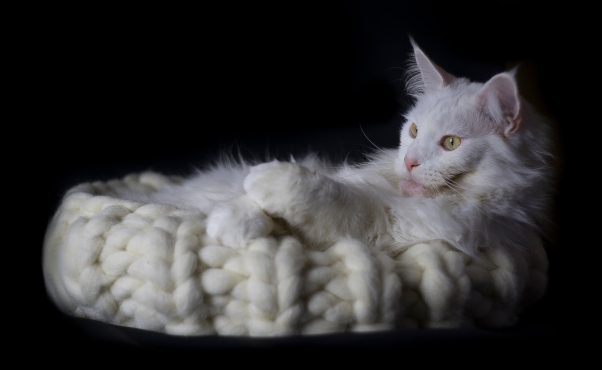 They love being outside at night time, the cats.  They’ve dozed all day in the heat, and they come alive in the cool of the evening.  Sometimes they refuse to come in at bedtime, and stay out on patrol all night.  Uncle Herbert howls outside the kitchen when he wants to come in.  Sometimes as early as 5am.  But last night the howling started a lot earlier than that…at 12.15 am!  Yes, I had been asleep for all of 40 minutes. 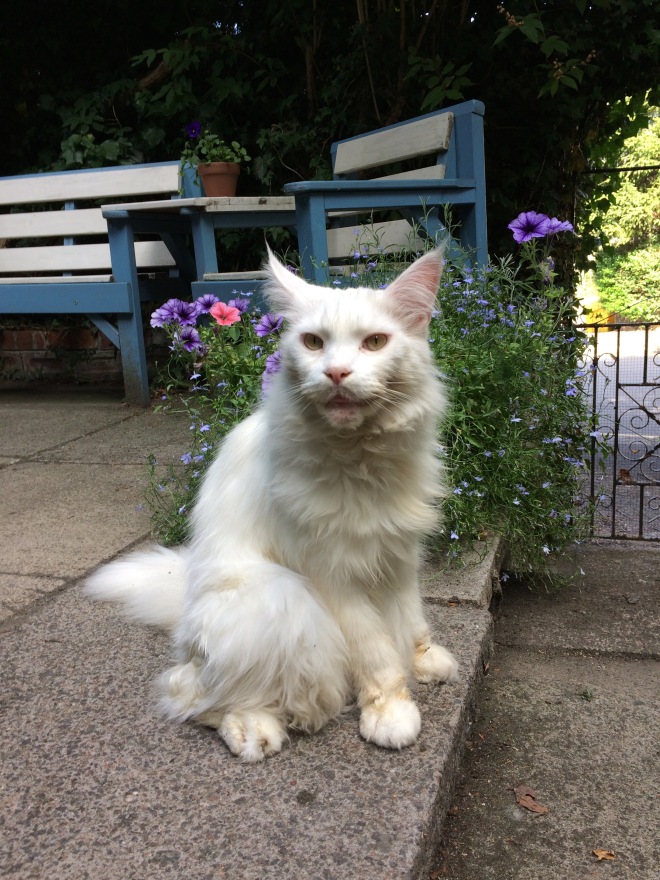 I went downstairs to the kitchen and opened the door.  Herbert was sitting on the path, but instead of darting inside, he just stared at me and howled again.

Animals are very intelligent and they do their best to communicate with us.  So what was he trying to tell me?  A shape appeared at the gate.  It was Monty!  Then I understood – Herbert did not want Monty to be left outside on his own.  He would not come in without Monty!

Now, there are 2 routes into our garden when the gate is shut.  Over the low wall at the back, or over the high wall via the tree platforms at the front.  But Monty was sitting outside the gate, saying ‘Meeeh!’  Despite his considerable size, he sounds like a little mouse.  After 8 years, I still find it slightly surprising.

‘Meeeeh!’  he said again.  I have learned what this means, when he sits outside the gate.  It means ‘I would like Premium service, human.  I do not wish to navigate the wheelie bin, the high wall, and the tree platforms, in order to get into the garden, on this occasion, thank you’.

So, in pyjamas and bare feet, I went down the steps, opened the gate, picked up all 8kgs of Monty, and carried him into the house, with Uncle Herbert trotting after us.

And where was Larry, when all this was going on?  He was asleep in bed with the OH, being a good boy, for once.

Monty is a black smoke Maine Coon.  He has the appearance and attitude of an entitled aristocrat.  As long as I treat him in the manner to which he is accustomed, we get along just fine.  I feel strongly the privilege that Monty extends to me every day, by allowing me into his inner circle.

Yes, you may look at me.

Occasionally we clash if I want something to happen which isn’t his idea.  The best way to deal with this, is to make him think it’s his idea in the first place.  Yes he is a cat, but he is 8kgs of toned muscle and sheer determination.

Monty’s long, silver-grey fur is prone to matting in springtime, when the excess winter coat needs to be brushed out.  If I am not clever enough to get around him, his belly fur and back trousers form solid lumps.  If not removed, they will tighten and become very uncomfortable for him.  So the race is on for me to get those lumps out before they get too bad, and to comb his fur like mad before more lumps can form.

Some years the lumpage is worse than others, and sometimes I have to give in and take him for a haircut, under sedation, at the vets.  They will shear him like a sheep and although he looks ridiculous afterwards, he is perfectly happy rocking his summer crew-cut, lump-free.

Well, we are not there yet.  There were lumps in his armpits which I managed to tease out, by taking advantage of a deep sleep and the window of opportunity it presented – about 5 minutes.

Much worse were the lumps in his back trousers.  This is a location to which access is strictly forbidden.  Even when fast asleep, Monty is alert to any rummaging in that area. He has sharp claws and he is very quick.  This is a cat who can catch a squirrel, for goodness sake.

But yesterday – a breakthrough.  Chilled out in his wool basket, drowsy with the heat, I approached with a small pair of scissors.  I was lucky with the angle and – snip!- one lump, then two.  Monty stirred, realised what I was doing, and joined in.  He reached down and removed lump number three himself.  Job done, and not a single scratch. 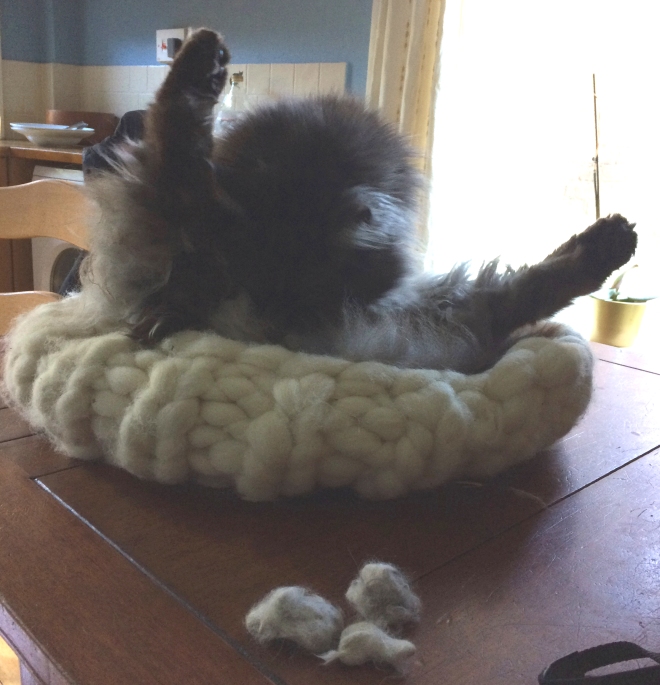 I am now reasonably hoping to avoid the expensive haircut at the vets…fingers crossed!

…and they’ve been well and truly road-tested by all three crew members.  I think we have the seal of approval. 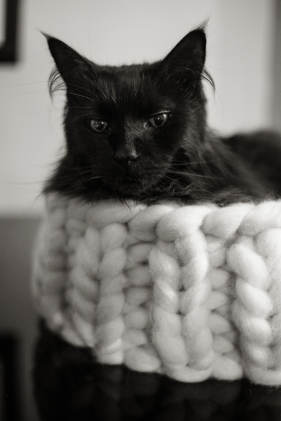 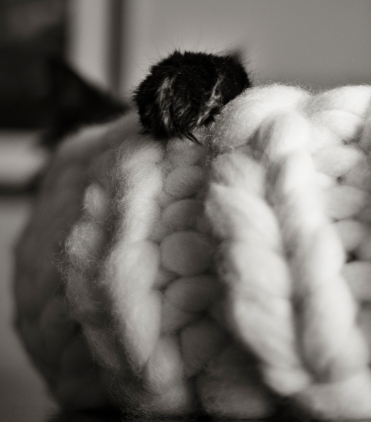 It was useful to make two baskets.  One came out a bit tighter than the other, and that turned out to be the best one.  This is because, over a few days’ constant use, they stretch.  So the looser basket has ended up a bit on the floppy side, and the tighter basket is just about right.  Also, as I knitted the base more tightly, the sides appear taller.

The crew spent hours lounging around in their new beds, which enabled us to take lots of scrumptious photos of them.  My partner is a professional photographer (thesheffieldlens.com) – I am sure you can tell which are his pictures and which one is off my iphone!

I am excited to make the next batch.  I might try a different colour, or at least, a different sheep….

The new yarn is on the needles, and the cat basket is in progress…

Wow this yarn is even better than I expected.  It’s bigger and thicker than the yarn I used for the original baskets.  And it knits up fine using the needles I already have.  So I don’t have to order a load more knitting needles to be custom-made in bigger sizes.

I have amended my pattern slightly to accommodate the thicker yarn.  I was a bit worried that I hadn’t maintained an even thickness and twist on all of it.  After all, the wet felting was a bit of an experiment.  But working the yarn, it doesn’t seem to matter.  There is enough twist and felting to give it a bit of structure.  In fact, I think it performs even better than the old yarn.

It’s easier to get a flatter base.

It’s got that characteristic, fleecy scent.

The stitches are massive, with loads more visual impact.

It’s not finished yet, Monty. 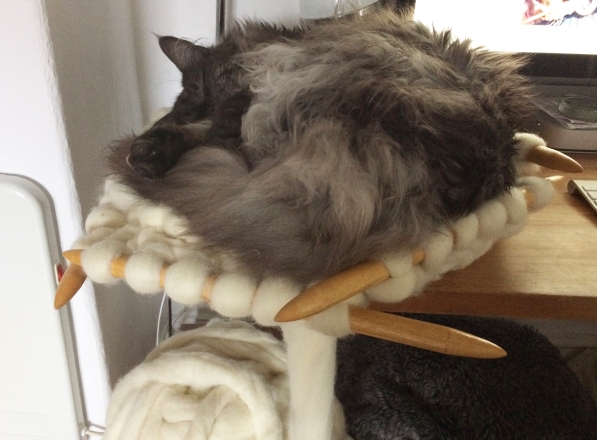 Yes indeed, cats have been known to like boxes.  Empty or with stuff in, they don’t mind. In them or on them, it’s all good.

Check out this Amazon Prime delivery.  Just the right size for Larry.  Literally had just opened it and took the stuff out.

Herbert dived in before we even removed the paper. 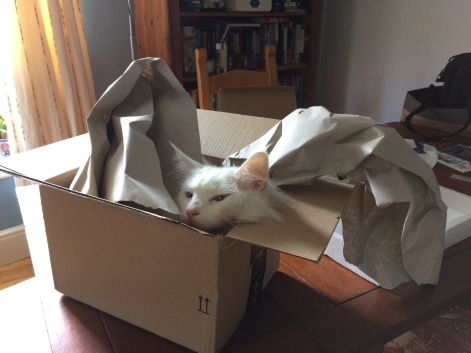 And Monty likes to be up high. Yes he has a slightly odd summer haircut, but he’s still rocking this box. 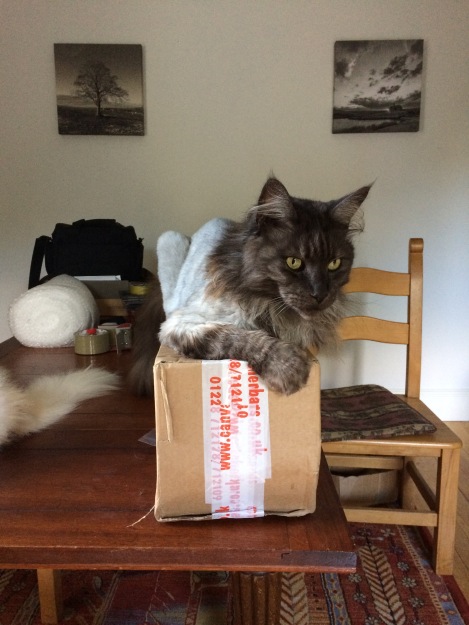 Eagle-eyed readers will notice that this post has nothing to do with knitting….again.

I spent the day in London last week on a round of appointments and found time to gaze adoringly at the magnificent lion statues in Trafalgar Square. 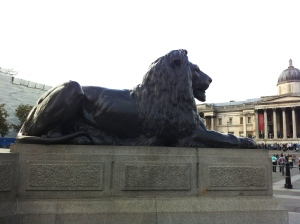 The four lions, completed in 1867, are, interestingly, not identical, differing in the manes and head poses.  The artist is Sir Edwin Landseer, who was celebrated for his life-like paintings of horses and dogs. He managed to give personality to each of his subjects.  Here’s a Landseer painting:

The Duke of Devonshire and Lady Constance Grosvenor, by Landseer

I have to say he is one of my favourite artists. If you can, check out some of his dog portraits. They are amazing.

But back to the lions.  Here’s another view of one of the statues. Isn’t it incredible? 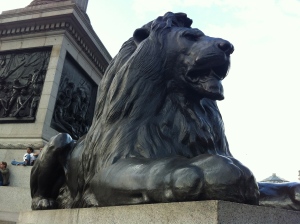 And here’s Monty, my own lion, doing a fair impression. 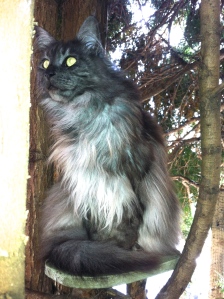 Monty in his tree

I design knitted items. Mostly cakes. I live with a man and 3 cats. I am a raw feeder and an atheist. I work full-time. There is a piano recording studio in my living room. There is cat hair in my knitting. The cats and the knitting keep me sane.

Politics, Raising kids, being a wife and mother from a conservative perspective!

The life and times of Peter Reynolds

We the People of the United States

Fighting the Culture War, One Skirmish at a Time

A father's thoughts for his children ... and other stuff

A man's work is nothing but this slow trek to rediscover, through the detours of art, those two or three great and simple images in whose presence his heart first opened. ~Albert Camus

Books, Knitting and Other Good Things

adventures in baking and crafting

Creating with fiber, one stitch at a time

Stumbling through life one knitting project at a time.

Knitting Revolution
Create a free website or blog at WordPress.com.